by kind permission of Eilidh MacPherson, farmingscotland.com.
Records were broken at Stirling Bull Sales this year (Feb 2017) as two Salers sires hit the headlines and the 12,000gns mark. (This however, was soon to be broken at Castle Douglas in Autumn 2017).
The MacKenzies of Whitebog, Fortrose on the Black Isle sold five of the nine bulls catalogued, with Whitebog Kracker topping the trade. Salers breeders, P.M. and S.M. Donger, Towcester, Northants, purchased him.
“We sold the other four privately before the sale – including two to Orkney and one to the new Monitor Farm on Shetland. That was the last link – as we have now sold from Devon to Shetland!” exclaimed Anne, (also nee MacKenzie) who is the fourth generation MacKenzie to farm at Whitebog.
Growing up as an only child, she helped her father on the farm from an early age and full time when she left school. Her husband, Alister, a farmer’s son, worked locally before they married in 1963. 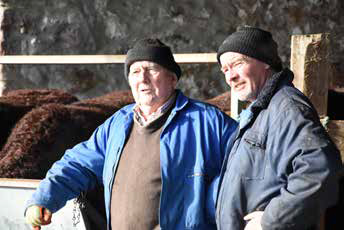 Nowadays Anne and Alister, who farm in partnership, have taken more of a backseat, while their son, also Alister runs the farm.
The Whitebog Salers chapter began back in 1984/85, when Alister (jun) returned from an International Agricultural Exchange to New Zealand and Canada.
“Everyone thinks that Salers are wild – but they are not. All breeds have a wild streak – it depends on how you work with them,” commented Anne.
Alister (Jun) joined us in the farmhouse at this juncture and took up the story. “After college at Clinerty, I headed to New Zealand on an IAEA exchange and worked on a farm near Pahiatua, on the North Island and then toured for a month. The farmer still comes to visit us.”
He loved New Zealand, but then found Canada, “big, cold and flat.”
“I worked on a farm near Airdrie, not far from Calgary – it was pretty rough grazing and carried 300 cattle – Salers. They were easy calving and not like the Holstein cross Herefords we were running at home.”
On his return to Scotland, a Salers bull was purchased to cover the cows at Whitebog.
“The second bull we bought was by Bruno – from Bryan Walling, Over Whitlaws, Selkirk – who was the first to take Salers into this country. We purchased a bull calf and a heifer calf at that on farm sale and everything of note goes back to that pair – Cumbria Fury and Cumbria Dot.”
The MacKenzies are currently running 70 pedigree Salers cows with the other 90 head, which are pretty close to pure.
“They are easy calving – so there is less stress – so it is easier to get them back in calf.”
Twenty of the pedigree cows calve in March, then the bulk calve after the Royal Highland Show.
Depending on the weather, the cows go out in March after weaning, onto swedes and straw. By late May they are turned onto grass, depending on the growth.
Any young stock not destined for breeding is sold in April at nine or ten months of age, mostly through Dingwall and Thainstone. “ Salers tend to make more per kg in Aberdeenshire – they don’t seem to be so popular in this area, although my neighbours now have them and a few others on the Black Isle.”
On the health front Whitebog has no immediate neighbours as geographically it is forested on three sides and the main road runs along the fourth – so there is no nose-to-nose contact with any other livestock.
“We are BVD accredited and Johnes level 2, through the Orkney Hi-health scheme.”
In the summer months the MacKenzies do a wee bit of showing, but unlike many of the other Continental breeds, there are very few Salers classes at the shows, so they can find they are competing against much bigger beasts.
“Last year we showed at Echt, Dornoch, the Royal Highland and the Black Isle. It is good for the beasts as they are so easy handled by sale time. We won Champion Salers at Echt, first in class at the Highland, with two seconds in the bulls in 2016. It was the first time Echt had a Salers class – there were 12 forward – as many as at the Highland.”
The summer of 2013 was the most fruitful showing season for these successful Black Isle farmers. Whitebog Homer, took home the Junior Male Salers Champion at the Royal Highland Show and Whitebog Gingernut secured the Reserve Junior Champion Heifer.
“We have won at the show at Castle Douglas five times in ten years and once reserve,” added father Alister, “and won Stirling most times, but not always.”
“We’ve been very lucky at Perth and Stirling,” commented Alister Jun. There is a wide range of buyers there, whereas at Castle Douglas it is just Salers buyers. I feel the main sale should be at Stirling.”
The MacKenzies had the last Champion Salers at Perth before it shut, selling to 4000gns – a centre record.
They then secured a breed record of 7500gns at Stirling when it opened, with Whitebog Convenor, which they held for a few days! His half brother Mr Harvey, named after the foot trimmer, made 7800gns a couple of years later. They secured the Championship at Stirling again this year (2017) with Whitebog Kipper, who headed to Newton Stewart with the McCornick family at 10 000gns. Kipper, was born on 16/7/15 and is sired by Whitebog Sandy out of Whitebog Emily. 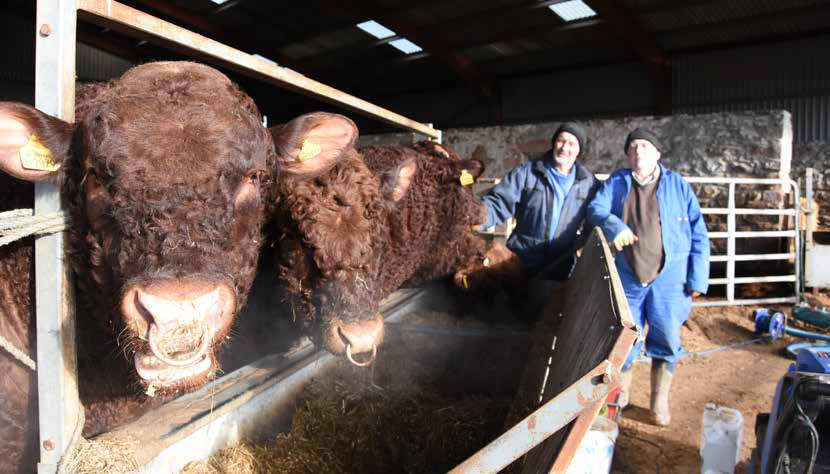 Alister Jun. feels that December is too early to be asked for numbers of bulls being put forward for sale at the February bull sales. “We list all we have for sale at that juncture, but may sell some on farm before that. With folk buying them at thirteen months, saves us work, training and commission. We take the top ones to the sales as the publicity is the best advertising.”
Nineteen is the highest number of bulls sold off Whitebog in a year. “In 2016, six went to Stirling, one to Dingwall and two to Castle Douglas, with the rest traded privately.”
The same policy is carried out with the tups traded off the Whitebog pedigree Suffolk and Bluefaced Leicester sheep flocks.
“We sell some at Dingwall and a lot in private deals on farm in September and October, with a fair number going to Shetland.
The tups mainly go through an agent and with the bulls, we find it is word of mouth. Social Media has also proved an excellent marketing tool. “We find that more people want to buy on farm rather than go to the mart – some for animal health reasons, others it is a time factor, or distance from markets,” The cattle are usually housed on the return from Castle Douglas, or beforehand if it is a wet backend. They are fed a mix of silage, straw, potatoes, draff and home grown bruised oats.
Walking through the cattle courts, like other herds the cows are inquisitive, but do not flinch and certainly don’t act wild, as the Salers breed seems to have been branded by the uninitiated.
Young stock are creep fed an oat mix with 35% Harbro nuts, while the pedigree bulls are on a Norvite blend, mixed with oats, straw and potatoes in with 25% of the mix made up of silage, to push them on. “The bulls have been so contented since we put them on that mix – they are so easy to work with and train,” added Alister Sen., who judged the Royal Highland Show in 2014 and Castlewellan, in Ireland.
The MacKenzies were planning another outing to France, to look at bulls. On a previous outing they marvelled at a show with 1000 head of Salers, with horns and bells and cows being milked in the mountains, with the calves suckling the last quarter.
On the topic of bull selection, Alister Jun. was rather evasive – “It depends what you need, to compliment the cows you have – good on legs is the number one, but I don’t want to give too many secrets away,” he laughed.