Sioned and I recently had the pleasure of working with Dai Jones and the team from Cefn Gwlad, taking part in the making of a programme for S4C about Salers cattle. We spent an enjoyable few days filming and got to experience just how much hard work and footage goes into the making of a TV show.

This great opportunity came about as a result of a chance conversation at the Royal Welsh Show. Dai Jones, the presenter of Cefn Gwlad and a farmer himself, dropped in at the Salers stand. While chatting about Salers cattle I mentioned that it’s fascinating to see how they are managed in the Auvergne. Dai thought this would make a good programme and got in touch after the show to arrange to come and film with us. The Cefn Gwlad team asked us to film some footage at home, with our own Felin Salers, and to arrange a four day itinerary of farm visits in France, ending with a day out at the National Salers Show. With help and support from our French contacts, we put a schedule together and eagerly awaited the arrival of the film crew. We were blessed with beautiful weather for the day of filming at home.

The film crew arrived bright and early and the cameras were rolling. We were asked to try to be completely natural and forget that we were being filmed. That’s not easy when you’re trying to walk and talk, at the same time, into camera, wearing a radio microphone and being followed around by a sound man with what looks like a furry hat on a stick, but the crew were very friendly, completely professional and soon put us at our ease. Our cattle were out enjoying their summer grazing so we took lots of footage around the farm. We rounded off the first day together with a relaxed, home cooked meal of “lobscous”, made with our own Salers beef and accompanied by some good red wine.

Early the next morning, we all flew out from Liverpool to Limoges airport and picked up a couple of hired cars to drive down to Salers. A good cameraman is always on the lookout for great shots; every so often, the crew would suddenly pull over because there was a great piece of sweeping road or a good backdrop of trees to film! We started to realise that what looks so seamless on a TV programme is actually put together very carefully with a lot of attention to detail. Our first visit was to the Parsoire farm in Pleux, Cantal. It’s a family enterprise, with mother, father and two sons all helping to milk the 50 strong herd. Dai and the crew were fascinated to see how milking is done here. The cows walk in to be milked and calmly take their places in the barn. As each cow is due for milking her calf is walked in and put next to her. To encourage the cow to let down her milk, the calf is allowed to suckle for a short time before being tied next to the cow.  During milking, salt is put on the calf’s back to encourage the cow to lick the calf. After milking is over, the calf is allowed to suckle again briefly before cow and calf are turned out again separately. The quiet temperament of the animals and the skill of their handlers is wonderful to see. The cows are relaxed and the handlers are able to easily pick out each cow’s calf and walk it (without haltering) into the barn. What a great endorsement for the Salers breed and for traditional stockmanship. Dai and the crew thought it was fabulous footage for the programme. At the time of our visit, the calves were only a month away from being fully weaned, with the heifer calves kept to grow on and the bull calves sold on to a finisher.

After all that travelling, we were looking forward to a good meal and a hot bath, so it was off to the hotel in Auriac to relax, chat about the day’s filming and go over the schedule for the next day. They also bought in the entire pedigree herd of 80 Salers from Monsieur Dauzet on his retirement. M Dauzet wished to sell his herd intact, as is common in France, so these cattle have not actually had to move house! They are now owned and managed by Olivier and Christelle, but M Dauzet can still open the window and see “his” cattle on the land. Our final call on Thursday was high in the mountains, at the farm of Guy and Marie-Jo Chambon in St Martin Valmerouz. We got to stretch our legs, walk off some of that superb French wine and food and appreciate the clean mountain air and the ever present sound of the cow bells.

We got some excellent footage of cows being milked directly out on the pasture in the most traditional way, with the calf tied to the cow’s front leg.  Milking here is a tourist attraction. We met other summer visitors on the hill who had also come to see the tradition. Guy and Marie-Jo literally live with their cattle all year round. During the summer months, they live and work up on the mountain, milking with a tractor driven milking machine and carrying the milk back to the homestead in the transport box. All of their milk is used directly for the production of Salers cheese. At the end of the summer, they and the cattle come down from the mountains and overwinter, until spring comes and they move back up to the mountain to start the milking and cheesemaking season over again.

It was great to be able to record this traditional and unique lifestyle while there are still familiesliving and working this way.

Friday saw us at the showground, doing some preliminary set up for filming on the following day. Nothing is left to chance, so the crew were working out the best camera angles and the show events that they wanted to cover. Once they were happy with the set up, we were back over to Salers to film some outdoor and travelling shots. Apparently my white knuckles and the slightly nervous look on my face when Dai Jones was driving us was very amusing …… never mind, hopefully those shots will end up on the cutting room floor! Saturday was the big day of the show. Before hitting the showground, the crew wanted to film a traditional outdoor market, so it was off to Mauriac with Sioned as their guide. Live fish, fresh chickens, hanging game and all the ambience of the French marketplace was captured on film, complete with the striking of the town hall clock at 12pm.

We couldn’t visit Salers without seeing this man

Back at the showground, we took lots of footage of the pens, around the show in general and filmed a cow and calf class. 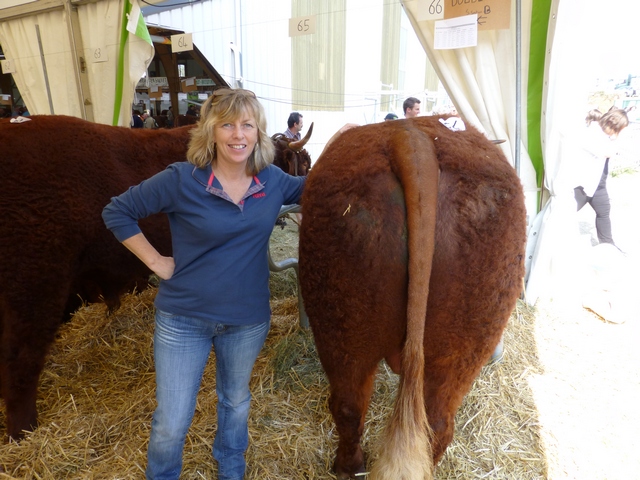 There were some superb Salers present, and we even got to see the ‘triple purpose’ breed in action pulling a cart.

Just to finish off our trip, we were approached by the local French TV station, so I gave my first (and probably last) ever interview to foreign media. So, to recap, that’s a Welshman speaking English to a French audience. Hopefully they added subtitles when it was broadcast!

Dressed in their best

Being wired for sound

Filming in the crowd

With the filming wrapped up, we got back into Liverpool on Sunday, weary but really pleased with the results. We hope it has made a fantastic programme for Cefn Gwlad and shown off the unique qualities of the Salers breed.

We certainly enjoyed the experience and are looking forward to watching it. We’re told that the footage will be made into a 1 hour special, due to air around April 2013.

Special thanks go to Dai Jones and his crew, who were wonderful to work with and made us feel very comfortable. Thanks also to Laurent Antignac and Bruno Faure for all their help in scheduling our visits and to our marvellous interpreter Emilie Delbert.