DESPITE horrendous presale weather and more entries, prices held up well against last year’s record breaking sale of pedigree and cross-bred Salers cattle at Castle Douglas, where two bulls led the trade at 9000gns apiece.
While a good solid trade prevailed in both sections, averages were mostly down on last year’s extreme levels which had a new 15,000gns record for a bull and a cracking trade for females.
On a more optimistic note, the growing demand for easy calving, low maintenance, hardy suckler females, ensured a buoyant demand amongst the commercial stock, which saw a 25% increase in entries, with a good number of new buyers forward from throughout Ireland, Aberdeenshire, the north of England and down to Northampton and Wales. “Considering the year we have had, we had a good sale,” said Liz Wilde, secretary of the Salers Cattle Society.
“Farmers are apprehensive about what is going on within the industry with Brexit fast approaching and winter feed being an issue for many, so understandably, people were a bit more cautious. “The ease of calving and management of Salers is paramount in today’s world. That live calf with hybrid vigour and fertile, healthy milky mother is worth every penny and will always be much sought after,” she said.
Wallets Marts managing director and auctioneer, Robin Anderson, was also keen to highlight the buoyant trade. “Once again the commercial trade set the trend. To have a 25% increase in bulling heifer numbers aged between nine and 18 months that still average £1307, just highlights the benefits of this suckler cow breed in the market place. At a normal sale, such numbers would have depressed the trade, but averages were only back marginally on last year’s record levels. “Calf sellers have taken a bit of a hit this year, so it is understandable trade was back. There was nevertheless more a difference between the top and bottom end of the market with farmers still prepared to fork out more for better quality stock,” added Mr Anderson.
Leading the commercial market at £2200 per head was the champion pair of in-calf heifers from Adam Crockett and his father, Roy, who run 100 cows from their base at Deanfoot, Denholm, Hawick. Their rising two-year-old heifers are both by the French sire, Iron and sold due in April to Seawell Kitemark, to Alex and Jonathan Wright, Pinmore Mains, Girvan.
First to hit the 9000gns mark was the presale champion at the pedigree show, Harestone Lamborghini, from Neil and Stuart Barclay’s 25-cow herd from Harestone, Banchory, Aberdeenshire. 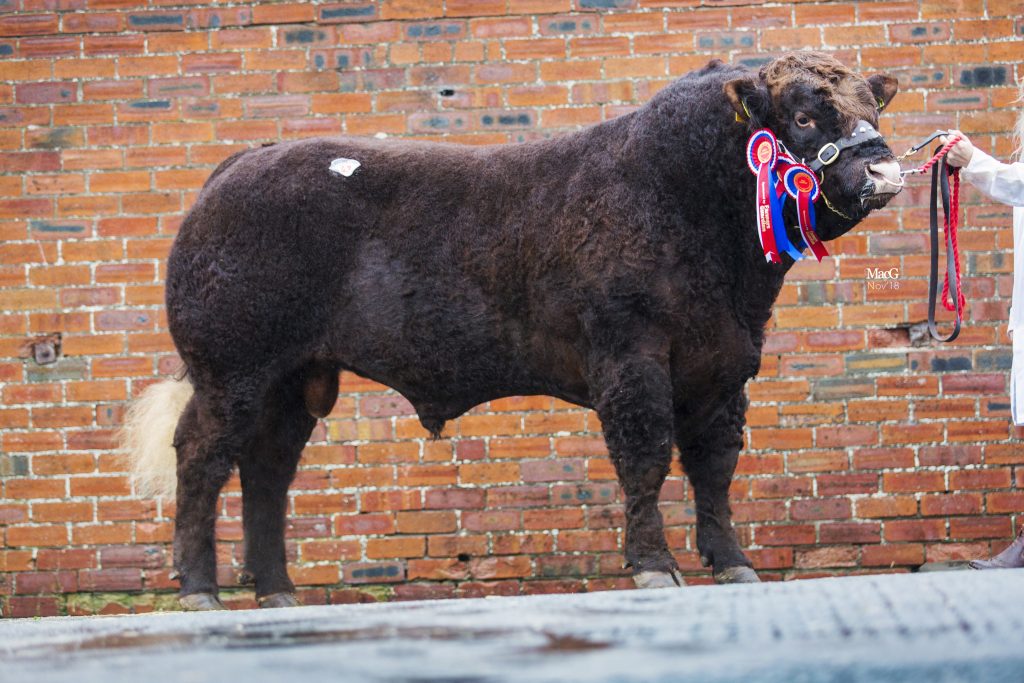 Producing a personal best both in the Salers show and sale ring for the father and son duo and stockman, Robert Marshall, was a son of Whitebog Convener – a bull bought in 2009 at Stirling for 7500gns which is still going strong at 11 years of age. The dam of this two-yearold is Ideale, an imported show cow is by Variegeois. Lamborghini was knocked down to Murray Alexander, who was buying a fourth Salers bull for the family’s 800 Limousin cross cow herd based at Mains of Mause, Blairgowrie.
Harestone, which is better known for its pedigree Charolais cows and more recently, its Blackies – having sold a tup lamb at £11,000 at Dalmally – also got 4800gns for the second prize winner to Lamborghini, Harestone Landward, another two-yearold by Convener. Also bred from an imported French cow, in the Ulysse daughter, Iena, Landward headed home with commercial breeders, W and AM Aitken, Scotchston Bank, Blyth Bridge.
Matching the 9000gns top price was one of the best bulls bred by retired vet, Patrick Boyd, who runs 40 pedigree Salers on the Isle of Tiree. His Drumaglea Legend, a 26-month-old bull which passed the weighbridge at 1112kg, was unshown at the pre-sale show and sold to John Martin, Swinlees, Dalry, Castle Douglas. Backed by some of the best bloodlines in the breed, he is by the French sire, Baron, a bull that has bred sons to 5500gns and 5000gns at Stirling, while his dam is Drumaglea Alice, a daughter of the French bull, Variegeois, that was also the mother of a 5500gns bull and the 12,000gns Drumaglea Kingpin 2. 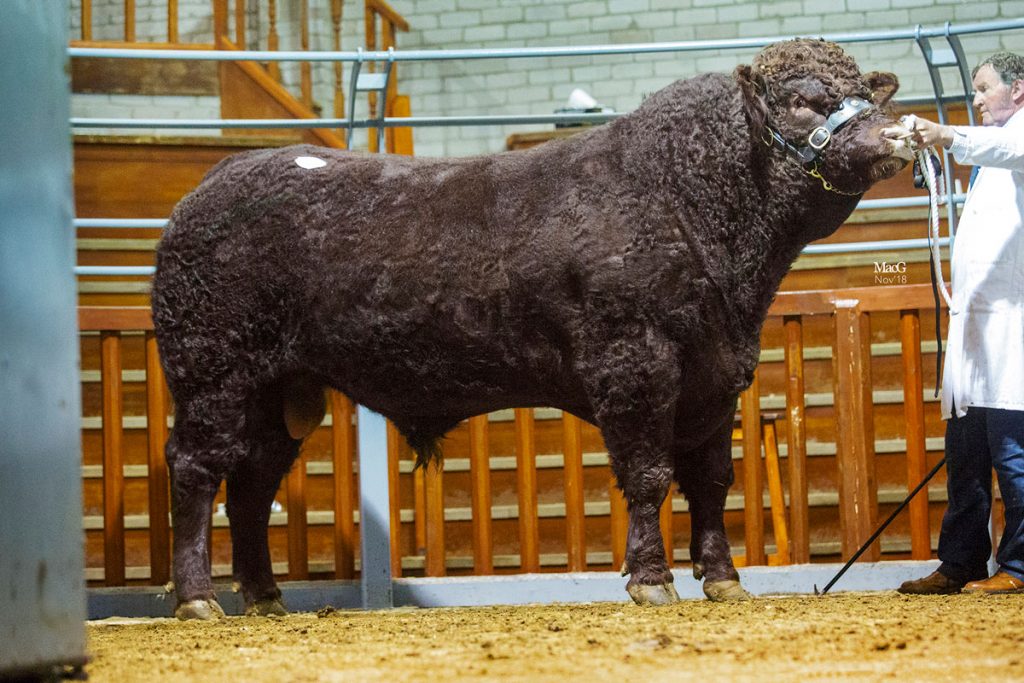 Mr Boyd also received 5000gns for his fourth prize senior, Drumaglea Lord of the Isles, a March, 2016-born son of Baron bred from another Variegeois daughter in the shape of Drumaglea Beyonce. He scaled 1040kg and goes out to work at East Lediken, Insch, having been purchased by commercial producer, Murdoch Duncan.
Stirling-based breeders, Gill and Malcolm Pye, who together with stockman, Kenny McKeague, run 85 cows at Rednock House, Port of Menteith, also had a good day with bull sales at 5500gns and 4800gns.
Dearest was Rednock Lagerfeld, an April, 2016- born polled bull that stood first at the Highland and champion at Stirling Show. Sired by the home-bred Rigel Munro which also bred the top priced bull at Stirling in October 2017, at 6000gns, he is out of Rigel Chanel, a daughter of the French sire, Sagitaire, that has produced a potential show heifer this year. Lagerfeld also headed home to Mains of Mause with Murray Alexander.
The Pyes’ senior male champion, Rednock Lauper, a July, 2016-born bull then made 4800gns selling to John Mitchell, Rumbleton Rigg, Greenlaw, Duns. Closely bred on both sides, this bull boasts Sagitaire in both his sire and dam’s side, with the sire being Rigel Officer, onto Rigel Cindy.
Top price amongst the pedigree females was 3000gns paid for Colin McClymont’s Cuil Mabel, a 21-month-old heifer from Cuil, Palnure, Newton Stewart, purchased by Andrew Hamilton, Marr, Thornhill, Dumfriesshire. Second in her class at the pre-sale show, Mabel is the first heifer sold from the French sire, Jordan, and out of Cuil Fabby, a daughter of the privately purchased Irish bull, Ballygar Galway. She sold in calf to the retained stock bull, Cuil London.
Cuil also produced two of the next four highest priced heifers at 2500gns and 2200gns and enjoyed a cracking trade for their entry of 50 yearling commercial heifers. The former, which made up part of the herd’s reduction sale, was Cuil Lemon, a Cumbrian Jonniesired two-year-old, sold in calf to Cuil London. She is out of the Blazer-sired Cuil Davina, and sold to Northern Ireland breeder, Stephen McGinn, Downpatrick, Co Down.
Cuil Lisa, a similarly-aged heifer by Jonnie and in calf to London, was bought by David Anderson, Barnakill, Lochgilphead. Her dam, a home-bred cow, is by Cleuchhead Xerox.
Northern Ireland breeder, John Elliot, who owns the Drumlegagh herd at Newtownstewart, sold two heifers at 2400gns including the female champion, Drumlegagh Lea. This May 2016-born heifer is by the French sire, Fanfan, a bull that has bred many show winners, and out of Drumlegagh Fabia, a Vicomte daughter. She sold in calf to Drumlegagh Hamish, a former champion winner at Balmoral and reserve at the Highland, to Alex and Jonathan Wright, Pinmore Mains, Barr.
The second, Drumlegagh Lisa, a similarly-aged heifer by the same sire and in calf to the same bull, was bought by P Stobart, The Square, Kirklinton. She secured a blue rosette at the pre-sale show and is out of a homebred Precieux dam.
Commercial bulling heifers peaked at £1800 from Rob and Kath Livesey, Firth, Melrose, purchased by Balbirnie Home Farms, Freuchie, Fife.
Auctioneers: Wallets Marts
Report – Patsy Hunter – Scottish Farmer, Business and Technical Editor