SINCE ITS introduction to the United Kingdom back in the early 1980s, the Salers breed has witnessed a slow but steady rise to fame. And it’s the maternal abilities of the breed that have really pushed it onwards, proving to be an excellent suckler cow in both pure and cross-bred herds.

And it’s the ideal cow for the Wrights – Alex and Joan together with son Jonathon, his partner Toni and their two boys, six-year-old Deagan and Mason, three – who run a herd of 110 Salers cows and followers, of which 30 are bred pure to produce replacements while the remainder covered by a Charolais sire.
Having moved to Pinmore Mains, near Girvan, from their native County Antrim, in Northern Ireland, back in 1995, the family have expanded their operations to include 510 acres between Pinmore Mains, Traboyack and Alton Albany, and rent a further 100 acres of grazing during the summer months.
Also kept are around 900 Texel cross ewes which are put to Beltex and Texel tups for producing fat lambs to sell through Newton Stewart where they often lie in the top three prices.
“We bought our first Salers cows back in 1998 at a sale at Castle Douglas,” begins Jonathon, who has taken over the majority of the work on the farm.
“There, we bought Campsmount May, who has bred exceptionally well and is still going strong today, as well as Cuil Mona.
“Following those initial purchases, we bought Pennymydd Wedge for covering the commercial herd and a further 10 bulling heifers from the McClymonts at Cuil, Newton Stewart.”
Each year roughly 10 females are bought in from some of the top herds around in the country, including the Risk, Poldean, Penningham Mains, Cuil and Whitebog herds.
And in 2006 the Wrights forked out 3600gns for the 2006 Castle Douglas champion, the Lascar-sired Whitebog Simon.

“Simon has really clicked with our cows and changed the stock here altogether. Sons of his have been sold locally with daughters selling well too,” said Jonathon.
And up for offer at this year’s Castle Douglas sale is Traboyack Optimus, a Simon son out of the Beeston Hall Camilla, a cow bought at Castle Douglas in 2006 for 2700gns.

“He’s the best I’ve bred to date,” said Jonathon. “He’s a well made, strong and powerful bull with a really quiet nature.”
But it’s not just breeding pure stock that is reaping the returns for the Wrights as in 2008, following the private sale of several stock bulls, they invested in a Charolais bull for covering the bottom end of the herd. 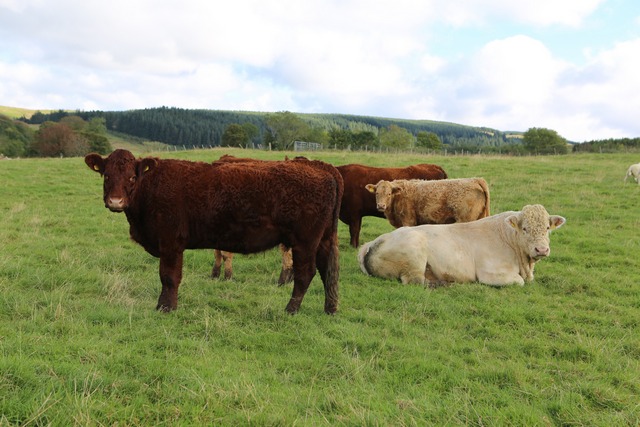 “The resulting cross is an ideal commercial calf. They can be sold at any age, from one-day-old to 30 months and the Salers mother retains the easy calving traits meaning I have no worries putting even bulling heifers to the Charolais bull.
“In fact, we have so little problems with the Salers that I’m more likely to stay with a lambing ewe than a cow during calving,” he said, further explaining that both lambing and calving occur in a very compact period in the springtime.
“They’re very quick to get up on the feet too, even the Charolais crosses, and are very quick to grow and simply bloom at speaning time when they’re offered ad lib silage and introduced to a small amount of Whauphill cow mixture.”
Each year around 20 of these cross-bred bullocks are retained to offer for sale the following year, as 18-month-olds, at Newton Stewart. This September, this batch of Charolais cross Salers sold at an average weight of 525kg and achieved 263p per kg or £1353 per head.
The remaining calves are sold straight off their mothers in the months of December and January through the store ring where, last year, bullocks cashed in to level at £810 and heifers at £720 aged between eight and nine months.
But to produce top end stock in the sales ring, Jonathon stresses that you’ve got to get the basics right.
“They’ve got to have plenty character and the conformation to match,” he said. “After that, I look for depth, breadth, width and a good, dark red colour with the ability to breed good calves. After all, there’s no point in buying a bad beast as you’ve got 14 years to look at it!” 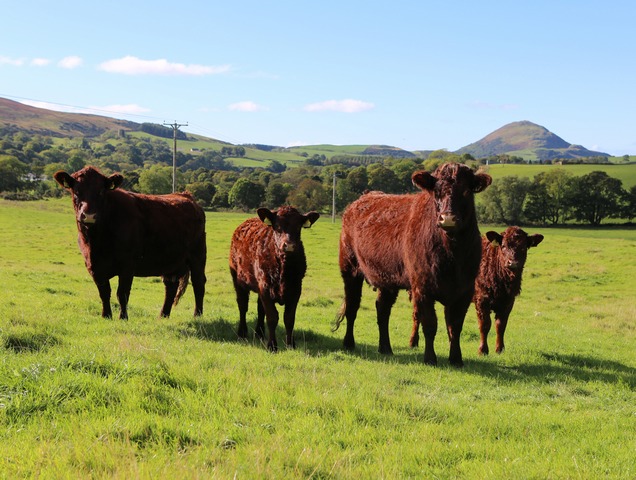 “I’d expect a Salers cow to live to 13 or 14 years old, giving us 10 or 11 calves in a lifetime, not including twins!
“I like to keep a tight calving period in March and April and so I’ll be strict with any yeld cows and sell them on as they’ve got to pull their weight. Typically we can expect only 2% of the herd to be empty and so, last year, the only two cows yeld in the herd were a 14-year-old Cuil cow and one which had produced four sets of twins.”
“And even though a Salers cow might be a bit slighter in frame than other continental breeds such as the Limousin, Simmental and Charolais, they can still demand a good price in the cast ring – last year 14-year-olds fetched up to £1200.”
But despite having all the qualities of great suckler cow, the breed still has a certain stigma associated with it which Jonathon is keen to put right.
“A lot of people seem to think that the breed has a mad streak through is but I don’t see it. Our cattle are very canny as we’re in about them every day and we’ve had a lot of buyers return for more stock as they’re so impressed with the breed.
“As a relatively new breed to the UK, I think they’ve come a long way over recent years and can easily rival the commercial suckler cow for her calf rearing abilities.
“You can’t compete with the fertility of the Salers and what’s more is that the females have plenty of milk with very few health problems such as mastitis and milk fever. In fact, the last case of milk fever at Pinmore Mains occurred six years previously.
“They’re the ideal breed for me as they give more calves with better health traits, resulting in more money,” he concluded.
Courtesy of The Scottish Farmer
By Kayley Kennedy
Photographs: Jacqueline Pettigrew