MOST FERTILE HERD IN SCOTLAND

As a breeder of commercial heifer replacements, Scottish Borders farmer Rob Livesey knows how important it is to have a good calving average.

So he is delighted that the pedigree and commercial herds at his farm in Melrose have been named the most fertile cattle in Scotland, according to Scottish Agricultural Colleges’ figures; an accolade that he attributes to the breed of cattle he runs at Firth Farm – the Salers.

And this year, the cattle have received another award – winning the inaugural best commercial herd at the Salers Cattle Society herd competition.

Rob and his wife Kath have been breeding Salers for 21 years and run two herds of about 80 breeding cattle at their 760 acre farm – the pedigree Cleuchhead herd, of 30 cows, and the Firth herd. They opted for the breed after viewing some of the first Saler cattle to be imported into the UK, at a farm in Cumbria. 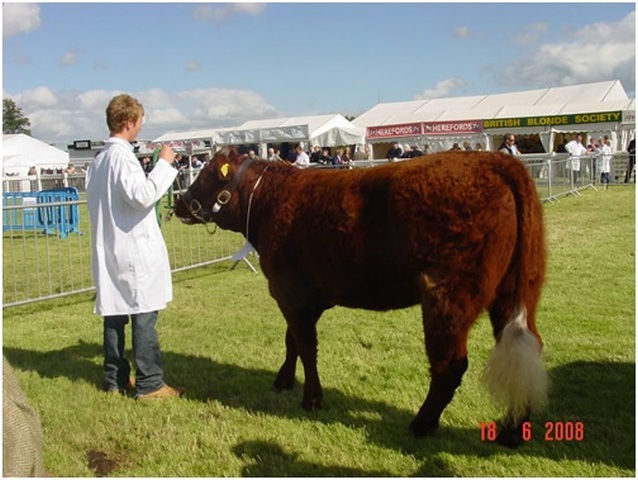 Mr and Mrs Livesey had the distinction of being Scotland’s first monitor farmers, and took part in the scheme from 2003 to 2006.

Under the initiative, fellow farmers visited the Liveseys farm to discuss how the business was managed, offering both praise and suggestive criticism.

Mr Livesey said: “We really enjoyed being a Monitor Farm. It was a very positive experience discussing issues and ideas with fellow farmers, as opposed to advisers.”

The main branch of their cattle business is the breeding of commercial heifer replacements, with most of the cattle they sell ranging from 50 to 95% pure Salers. And to maintain the quality of their commercial herd, the Liveseys bought the Champion bull at the Salers Cattle Society Sale, Poldean Vince, from Willie and Jennifer Davidson of Poldean, Moffat.

The steers are finished on the farm and sold deadweight to Scotbeef, with a small amount of the beef marketed privately. In addition to the cattle, the Liveseys also have a commercial flock of 1,200 Scotch Mules and 120 acres of arable land. They have two sons – Rory and Iain – who both take an active interest in agriculture and are at university.

For the first time in its history the winner of the Salers Cattle Society’s large herds competition has gone to Northern Ireland with John Elliot of Drumlegagh, Newtown Stewart, County Tyrone, lifting the trophy Mr Elliot runs the Drumlegagh herd of 65 pedigree Salers on his 120-acre farm. The judge at this year’s Society sale at Castle Douglas, he founded his herd in 1995.

The small herds award went to the Morwenstow herd of Sir Tony Austin of Stanbury Manor, Woodford, Bude, Cornwall, where Sir Tony runs a herd of about 25 pedigree Salers plus commercial Salers crosses. The herd was one of the first in the UK being founded in 1988.